Just how did ''Top of the Word'' develop?

Consultant Keith McGuinness has helped hundreds of people launch their own business. He knows better than most that a brilliant idea on its own isn’t enough to guarantee success.

Like countless other dads, Keith has binned new board games before they were even out of the box. The rules and instructions were too complicated even for the brainiest player, let alone the kids.

But Top of the Word is different. Keith developed a basic concept into a simple game for the whole family to enjoy. A game which can be explained in minutes and played for hours. 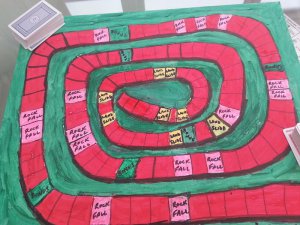 The challenge to be the first to the summit and finish the game will mean that you are ‘’TOP OF THE WORLD’’ ….but….who will be the winner next game…

Top of the Word is spreading fast...   Over 750 copies now sold - be one of the lucky people to own a first edition